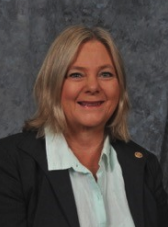 Dr. Adell S. (Dell) Goodwin was born and raised in Camden, Alabama, and her family later moved to Dothan, Alabama. Dell received her undergraduate degrees, master’s in Learning Disabilities and Administration, and AA Educational Specialist from Troy University. She received her doctorate degree in Educational Leadership from the University of Sarasota. In her 39 years with Dothan City Schools, she served as a Special Education teacher, Program Specialist, and Personal Assistant to the Director of Elementary Curriculum, retiring as as Director of Personnel Services. She is currently is the Executive Director of the Alabama Association of School Personnel Administrators and on the board for the National American Association of School Personnel Administrators.

Dell joined the Dothan Rotary Club in September 1996, serving in various areas of responsibility and leadership on club, district, and international levels. On the club level, she was involved in these service projects: White Elephant Sale, Salvation Army Bell Ringers, Senior Citizen Luncheon, Foster Children, Adopt A School, Dictionary Project, Food Bank, Scholarships, 4-H Watches, Habitat for Humanity, PolioPlus, and Rotary Foundation Program. She has served in the following leadership roles: Club Secretary, Vice- President, President Elect, President, and Immediate Past President. She also served on the committee for the construction of the Dothan Rotary Miracle Field and Playground. Dell has written and received several local grants. She served on the Dothan Rotary 100th Anniversary Celebration Committee and coordinated activities for Past Rotary International President John Germ during his visit as keynote speaker.

In District 6880, Dell has served as district secretary and been involved with PETS Training, district midyear and annual meetings, Local District Grant Selection Committee, District Global Grant Committee, District Governor Selection Committee, and District Awards Committee. She attended the Martin Stewart Project “kick-off’ building project in Greensboro. She attended the District ceremonial tree planting on the Capitol grounds with other District 6880 Rotarians and Governor Ivey to fulfill the challenge of RI President for every Rotarian to plant a tree. She served as the Rotary District 6880 Mid-Year Conference Event Coordinator for 2018.

The Dothan Rotary Club received the Presidential Citation and several Rotary District 6880 Awards the year she was president. Dell is a Paul Harris Fellow plus three and was honored to receive the Harry P. Hall Meritorious Achievement Award for 2017–2018, the highest individual award in District 6880. She recently received the individual District Award for Avenues of Service Citation for outstanding efforts in the five avenues of Rotary service for 2021–2022. She has attended the Rotary Summit for Zones 30 & 31 in Fort Wayne, Indiana, and also participated in the Emerging Leaders Seminar.

An important aspect of Dell’s life is family, including her husband of 49 years, Tim, whom she met in the dining hall at Troy University, a daughter and son-in-law, a son, and an adorable granddaughter and three grand-doggies. Dell and Tim are members of Covenant United Methodist Church. When she is not working, she loves reading, traveling, the beach, spending time with family, learning, and Rotary! Dell is excited and honored to serve as the District Governor for District 6880.

Learn More
Link to: Get in touch
Scroll to top

This is a notification that can be used for cookie consent or other important news. It also got a modal window now! Click "learn more" to see it!

We may request cookies to be set on your device. We use cookies to let us know when you visit our websites, how you interact with us, to enrich your user experience, and to customize your relationship with our website.

Click on the different category headings to find out more. You can also change some of your preferences. Note that blocking some types of cookies may impact your experience on our websites and the services we are able to offer.

These cookies are strictly necessary to provide you with services available through our website and to use some of its features.

Because these cookies are strictly necessary to deliver the website, refusing them will have impact how our site functions. You always can block or delete cookies by changing your browser settings and force blocking all cookies on this website. But this will always prompt you to accept/refuse cookies when revisiting our site.

We fully respect if you want to refuse cookies but to avoid asking you again and again kindly allow us to store a cookie for that. You are free to opt out any time or opt in for other cookies to get a better experience. If you refuse cookies we will remove all set cookies in our domain.

We provide you with a list of stored cookies on your computer in our domain so you can check what we stored. Due to security reasons we are not able to show or modify cookies from other domains. You can check these in your browser security settings.

We also use different external services like Google Webfonts, Google Maps, and external Video providers. Since these providers may collect personal data like your IP address we allow you to block them here. Please be aware that this might heavily reduce the functionality and appearance of our site. Changes will take effect once you reload the page.